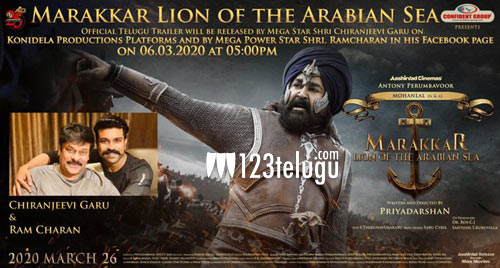 Malayalam superstar Mohanlal’s ambitious historic war drama, Marakkar, is slated to release on March 26th. The film will be simultaneously released in Malayalam, Telugu, Tamil, Kannada and Hindi in a humongous 5,000 screens worldwide.

Meanwhile, the film’s theatrical trailer launch is going to be a grand affair too. At 5 pm tomorrow, Megastar Chiranjeevi will be unveiling Marakkar’s Telugu version’s trailer via Konidela Productions social media accounts. Even Ram Charan will be simultaneously launching the trailer on his Facebook page.

On the other hand, Marakkar’s Hindi, Tamil and Kannada versions’ trailers will be launched by Akshay Kumar, Suriya and Yash respectively. Directed by Priyadarshan, Marakkar also has Keerthy Suresh in a prominent role. Antony Perumbavoor of Aashirwad Cinemas has produced the movie.