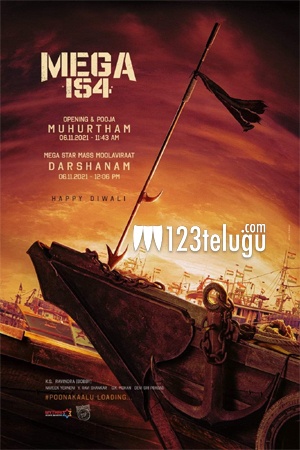 The stage is all set for the grand launch of Megastar Chiranjeevi’s highly-anticipated 154th film. To be directed by Bobby, the film, tentatively titled Waltair Seenu, will have its formal launch on November 6 at 11:43 AM. Also, the Moolaviraat Darshanam, education is expected to be the first look poster, will also be out on the same day at 12:06 PM.

Chiru154 was announced on the stalwart actor’s birthday on August 22. The announcement poster hinted that the story is set in the sea backdrop and Chiranjeevi will be seen in a vintage mass avatar in the movie. The poster also had the viral tagline “Poonakalu Loading”.

Chiru154 is being produced under Mythri Movie Makers and Devi Sri Prasad is scoring the soundtrack. More details about this crazy project will be out on November 6.