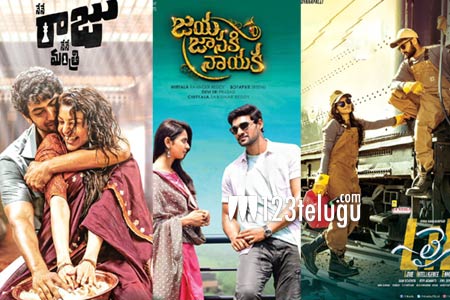 This 11th of August will be closely watched as three decent films LIE, Jaya Janaki Nayaka and Nene Raju Nene Mantri are releasing on a grand scale. If you closely observe, the common point between these films is that the heroes, Nithin, Bellamkonda Srinivas and Rana are all producers sons.

Moreover, there was a talk that one film will back out of the release race so that it can get ample theaters the next week and also have enough time for promotions. But the situations are such that not one producer is ready to move out.

For Suresh Babu, things are personal as it is his first production with his son and he does not want to compromise as he has unique content which is quite different from the others.

On the other hand, Bellamkonda Sreenivas has a solid support from his dad and huge money has been spent by the makers who have Boyapati’s backing.

Last but not the least, Nithin’s range went to another level with A.Aa and he too has support from the mighty 14 Reels and his dad who have a good grip on theaters in Nizam like how Suresh Babu has in Andhra.

Also, there is a talk that the producers feared negative publicity if they back out as rumors will start floating that the particular film only moved out as their output was not strong.

In such a case, the team of each of these films are hell bent and want to utilize the independence day weekend which is of five days this year. So, even though when many trade pundits said that one film should back out, no one is ready as their egos are at stake and everyone wants to come out victorious.

Well, who will win this war, we need to wait for just another two days to find out.