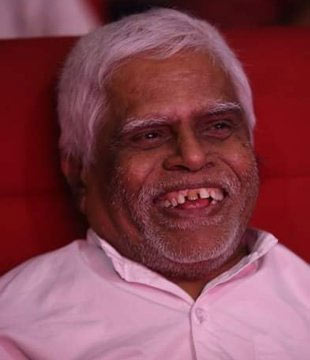 Senior comedian Gattu Veeraiah aka Potti Veeraiah passed away after suffering a cardiac arrest this evening. Veeraiah (74) had been unwell since several days. He complained of chest pain on Sunday morning and family members rushed him to a private hospital, where he passed away at 4:33 PM while undergoing treatment.

Veeraiah was born in Phanigiri in Suryapet, Nalgonda. He acted in stage plays in his school days and later moved to Madras to try his luck in movies. With veteran hero Sobhan Babu’s encouragement, Veeraiah met iconic directors Vithalacharya and Bhavannarayana. He was of just about 2 feet tall and his physical appearance earned him fame.

Veeraiah made his debut with Aggi Dora and went on to act in over 500 movies in Telugu, Tamil, Kannada and Malayalam languages. Radhamma Pelli, Jaganmohini, Yugandhar, Gajadonga, Tarzan Sundari are some of his popular movies.

Veeraiah’s wife Mallika passed away in 2008. He is survived by three daughters. His younger daughter Vijayadurga acted in a few movies. Veeraiah’s last rites will be held tomorrow at Maha Prasthanam in Jubilee Hills. Several Tollywood stars and MAA members expressed grief over Veeraiah’s demise.