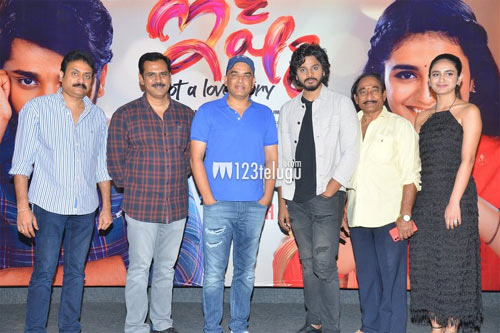 After a gap of nearly 3 months, movie lovers will finally get to watch a new Telugu film in cinemas this Friday. Teja Sajja and Priya Prakash Varrier’s romance thriller, Ishq, is hitting screens on July 30. As part of promotions, Ishq’s team and star producer Dil Raju today interacted with the film media at Ramanaidu Studios.

Speaking at the event, Dil Raju said that the film industry has been deeply affected by the COVID-19 pandemic since last year. He hoped that both the Friday releases will be successful at the box-office. “I am confident that audiences will patronize Ishq and make it a big hit,” he said.

Dil Raju went on to recollect how Ishq’s producers RB Chowdary, NV Prasad, Vakada Anjan Kumar and Paras Jain helped him in the initial days of his career as a distributor and later as a producer. The hotshot producer also revealed that Ishq’s director SS Raju had worked on his movies like Shatamanam Bhavati and MCA and lauded the debut director’s sensibilities. Lastly, Dil Raju wished the film’s lead actors Teja Sajja and Priya Prakash Varrier and the entire team a grand success.