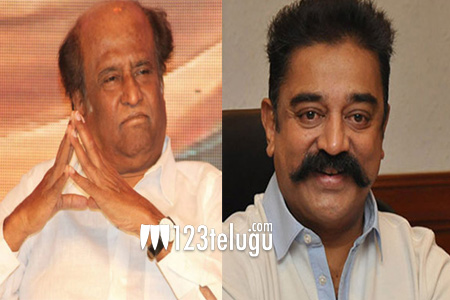 Are Rajinikanth and Kamal Haasan collaborating for a new film? This rumour has been making waves in Tamil film industry for the past few days. Buzz is that Kamal Haasan’s production house, Raj Kamal International Films might soon produce a film with Khaithi director, Lokesh Kanagaraj. Kamal Haasan himself mentioned that he is keen to produce a film with Lokesh at a recent awards ceremony.

The more interesting part is that Rajinikanth might be part of this project. In the past, both Kamal Haasan and Rajinikanth ruled out chances of them working together since the budget is bound to escalate; however, in this project which is just shaping up, Kamal Haasan could just be the producer of the film while Rajinikanth will be playing the lead role.

For now, this is just a rumour and it remains to be seen if it materialises sometime later this year. Currently, Lokesh is directing Vijay’s upcoming film, Master which is slated for release later this year.