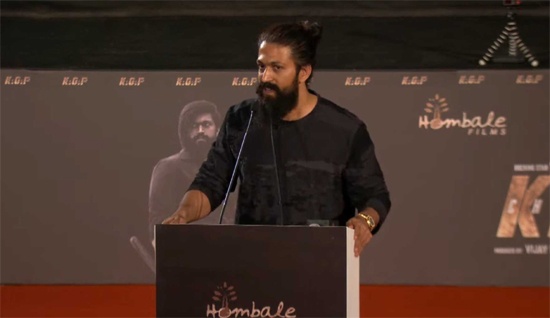 KGF: Chapter 2 starring Rocking Star Yash in the lead role is all set to hit screens on April 14, 2022. Ahead of that, the makers of the movie have organised a grand theatrical trailer launch event in Bengaluru.

After the trailer launch, the star of the movie, Yash addressed the media and attendees. Firstly, he has paid his respects to the late actor, Puneeth Rajkumar. Speaking about the film, Yash thanked everyone from the director to the light boy for putting their sweat and blood into the movie.

He also said, “KGF 2 is the pride of Kannada cinema. It’s Prashanth Neel’s film and crediting me for the film is not correct.”

Srinidhi Shetty, Rao Ramesh, Prakash Raj, Sanjay Dutt, Raveena Tandon and others played prominent roles in this movie. Produced by Hombale Films, the movie will be released in all major South Indian languages and Hindi.