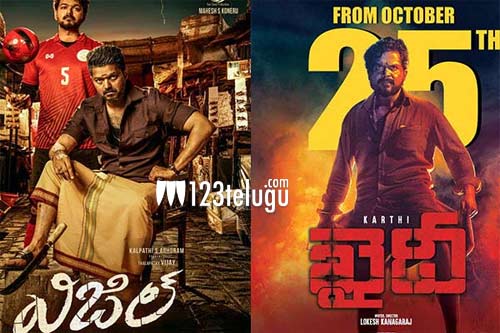 When no prominent Telugu film released this Diwali, two Tamil biggies, Vijay’s Bigil and Karthi’s Khaidi, occupied most of the theaters and enthralled the Telugu audience. Both Whistle (Bigil’s Telugu version) and Khaidi had a decent extended weekend at the box-offices across the twin Telugu states.

In its 4-day theatrical run, Whistle collected over Rs 7.7 crore share in AP and Telangana. The film’s theatrical rights were sold for nearly Rs 10 crore. With about Rs 2.25 crore yet to be recovered to reach the break even mark, all eyes will be on Whistle’s performance at the ticket counters throughout this week.

On the other hand, Karthi’s critically acclaimed action thriller, Khaidi, also had a solid 4-day long weekend in the Telugu states. The film collected a share of Rs 3.30 crore so far and needs just another Rs 1 crore to break even. The film witnessed a solid growth in its collections on Sunday and Monday, and the numbers during the weekdays will be quite crucial.