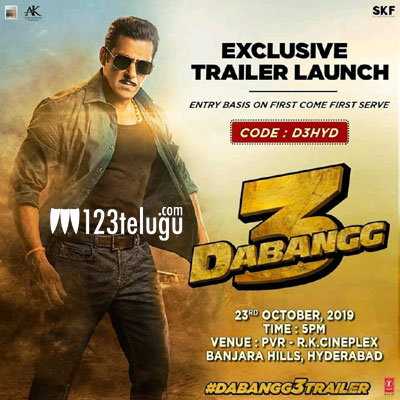 The big day has finally arrived. The theatrical trailers for Bollywood superstar Salman Khan’s Dabangg 3 will be launched this evening at 5 pm. Apart from the Hindi version, the trailers for the Tamil, Kannada and Telugu versions will also be released today.

Dabangg 3’s Telugu trailer will be exclusively screened at PVR, RK Cineplex in Hyderabad at 5 pm. After the screening, Salman will be interacting with his Telugu fans via a video conference. Salman will also be flying down to Hyderabad in November for the promotional events.

Dabangg 3 is releasing on December 20 and expectations are quite high. Prabhu Deva has directed this high budget entertainer, which is also has Sandalwood star Sudeep and Sonakshi Sinha in key roles.