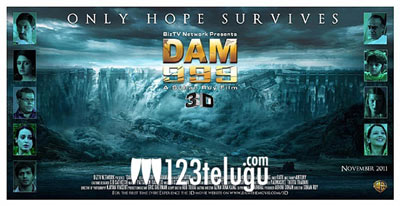 Sohan Roy’s upcoming film Dam 999 which is all set to release this weekend in English, Hindi, Telugu, Tamil and Malayalam has got into trouble especially in Tamil Nadu. The film is reportedly based on the Bandqiao dam disaster of 1975 that claimed lives of 250,000 people in China. However, some political parties in Tamil Nadu like MDMK alleged that the film is infact about Mullaperiyar Dam issue which has been the bone of contention between Tamil Nadu and Kerala for more than three decades. Earlier this week, cracks appeared near the base of this dam after series of tremors. The Malayalam film industry is voicing its concern about the safety of over three million people if the anything happens to the dam. However, politicians in Tamil Nadu don’t seem to share the same concern. The film has Ashish Vidyarthi, Rajit Kapur, Vinay Rai, Vimala Raman and quite a few international actors in lead roles. Interestingly, the film will be released in 3D and 2D and it’s also the first Indian film whose screenplay was selected by the Oscar committee for its library before the release of the film.