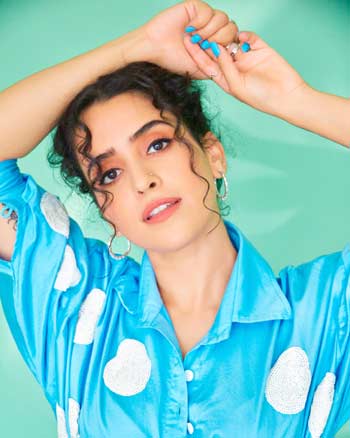 It is known that Nani’s 2020 super hit thriller as a producer, HIT, is being remade in Bollywood. Dr. Sailesh Kolanu, who made an impressive debut with HIT, will also helm its Hindi remake. Interestingly, Tollywood producer Dil Raju is bankrolling the film in association with Bollywood filmmakers Bhushan Kumar, Krishan Kumar and Kuldeep Rathore

The makers of HIT’s Hindi remake had announced that National award-winning Bollywood actor, Rajkummar Rao will be reprising Vishwak Sen’s role in the remake. Now, the latest update is that Dangal girl Sanya Malhotra has been roped in to step into Ruhani Sharma’s shoes in the Hindi version.

The film’s pre-production formalities are underway at the moment and the regular shoot will kick-start in a few weeks. Stay tuned for further details.