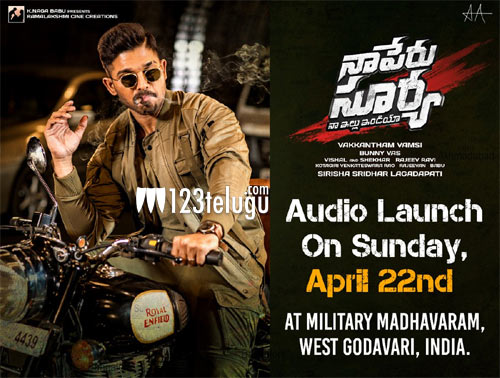 The shooting of Stylish star Allu Arjun’s upcoming patriotic drama, Naa Peru Surya is in its final stage. On the other hand, post-production activities are also going on at a brisk pace.

Meanwhile, the latest update is that the film’s audio launch event will be held on April 22nd at Military Madhavaram, near to Tadepalligudem in West Godavari district. Anu Emmanuel romances Bunny in this high-voltage entertainer, while senior heroes Arjun and Sarathkumar play important roles.

Writer Vakkantham Vamsi is turning director with NPS while Lagadapati Sridhar and Bunny Vas are jointly producing it. The film is slated for a release on May 4.