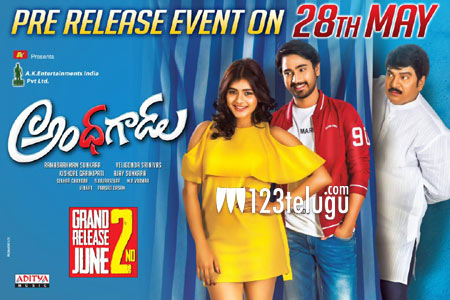 Young hero, Raj Tarun’s forthcoming flick, Andhhagadu is slated for June 2nd release. The film’s theatrical trailer which was released a few days ago has been well received by the audience.

Already, four songs of the audio album are out and are getting positive feedback from the music listeners. Meanwhile, the makers have decided to hold the film’s pre-release on May 28th in Hyderabad.

Writer Veligonda Srinivas is turning as the director with this film which is produced by Anil Sunkara under his AK entertainments banner.