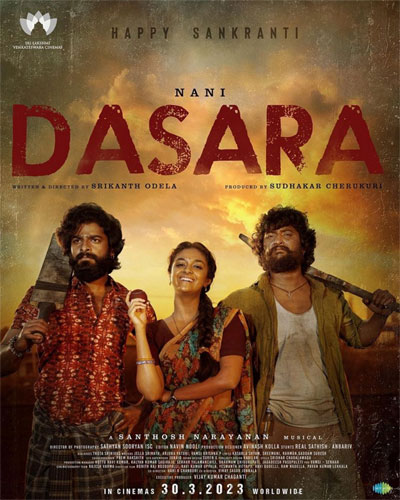 Natural Star Nani and debutant director Srikanth Odela teamed up for a raw and rustic film titled Dasara. The pan-Indian movie has Keerthy Suresh as the female lead. Now, the makers have revealed an interesting update on the film.

The team Dasara took to social media and announced that the teaser of the movie will be released on January 30, 2023. A small video glimpse has been released to announce the same in style.

The movie has Sai Kumar, Samuthirakani and Zarina Wahab in key roles. Produced by Sudhakar Cherukuri of Sri Lakshmi Venkateswara Creations, the movie has Santosh Narayanan’s music. The movie will be released in theaters on March 30, 2023.

Setting your screens on FIRE with the #DasaraTeaser on Jan 30th 🔥🔥