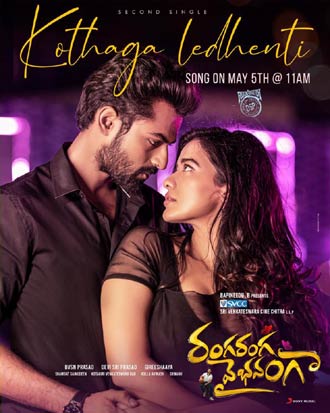 Mega hero Panja Vaisshnav Tej -starrer Ranga Ranga Vaibhavanga is in news again. Directed by Gireesaaya, the movie has Ketika Sharma as the love lady of the actor.

The movie’s second song is confirmed to release at 11 AM on May 5, 2022. Composed by the Rock Star Devi Sri Prasad, the song is titled, Kothaga Ledhenti. Going by the announcement poster, it seems to be a romantic song between the lead pair.

Produced by Sri Venkateswara Cine Chitra, the movie’s shooting is currently underway. The makers will announce the release date in the coming days.