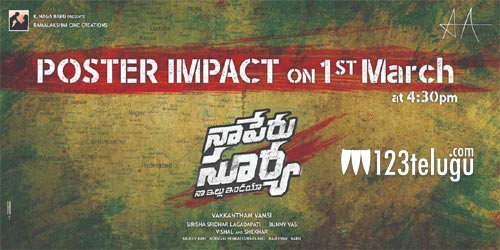 The makers of Allu Arjun’s upcoming patriotic drama, Naa Peru Surya Naa Illu India, are raising the curiosity levels among fans with unique promotions. After the first impact teaser that released on the New Year’s day, the film’s first Poster Impact will be felt on March 1st at 4:30 PM.

Writer Vakkantham Vamsi is turning director with NPSNII, while Lagadapati Sridhar and Bunny Vas are jointly producing it. Naga Babu is presenting the film, which is slated for release on May 4.