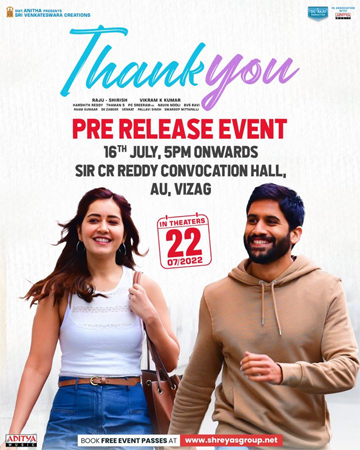 Naga Chaitanya starrer Thank You will be hitting the big screens on 22nd July. It is helmed by successful director Vikram K. Kumar and the film marks the second collaboration of the actor and the director after Manam.

The film has hit the headlines again. The word is that the pre-release event for the movie will be held in Vizag on 16th July at Sir CR Reddy Convocation Hall, Andhra University from 5 PM onwards. Recently the theatrical trailer was released and it received a very good response.

Raashi Khanna plays the female lead in the film which is bankrolled by Dil Raju under Sri Venkateswara Creations banner. Malvika Nair, Avika Gor, and Sai Sushanth Reddy are playing vital roles. The man in form, Thaman composed the music.

Gear Up to feel the Magical World Of Love ❤️