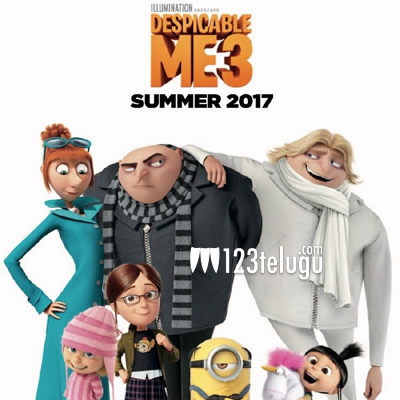 Despicable Me 3 is an animated comedy directed by Pierre Coffin and Kyle Balda. The film is jointly produced by Illumination Entertainment and has released India wide through Universal Pictures.

The animation and computer graphics are impressive in the film. The way Bratt has been projected as a baddie was good. The bromance scenes between Gue and Dru are entertaining.

Lucy as Gue’s wife character is also good. Last fifteen minutes of the film where the twin brother attacks Bratt was good and the CG and animation work in that episode is superb.

The Telugu version dialogues are entertaining. The dubbing work is good. Though the film lacks 3D effects, on the whole, Despicable Me 3 has good CG work and very good animations which will attract and impress the kids to the core.