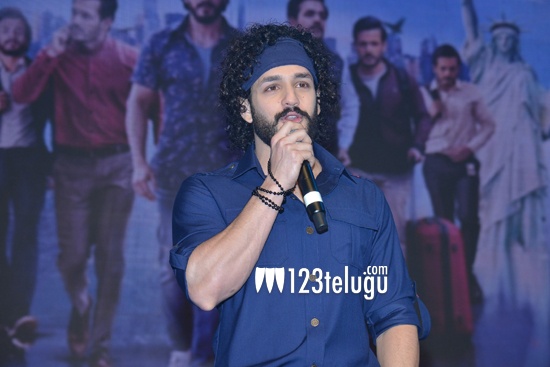 The pre-release event of Akhil Akkineni and Pooja Hegde’s highly-anticipated romantic entertainer, Most Eligible Bachelor, has been held in style tonight. Akhil’s speech at the event was genuine and heartfelt even though it was short and lasted not more than 5 minutes.

Talking about his director, Akhil said he became a fan of Bommarillu Bhaskar ever since he watched Bommarillu. “I did a lot of soul-searching in the last 2 years and you are part of that soul-searching,” Akhil told Bhaskar. Akhil exuded full confidence in the film’s success and urged the audience to enjoy the film with their families in theaters by following the Covid protocols.

Akhil thanked his fans for being a strong support system in his ups and downs and vowed that he will keep their trust with MEB. Finally, in a touching gesture, Akhil ended his speech by calling himself as “Chukkallo Chandrudu..Chaitu Babu Thammudu,” while inviting his brother Naga Chaitanya to speak.