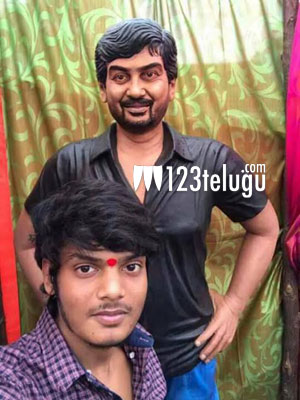 Dashing director Puri Jagannadh has a huge fan base for his signature style of filmmaking and an envious, carefree lifestyle. In a rare gesture, a group of die-hard Puri fans have built his life-sized statue at a fan named Prabhakar’s house premises in Kondapur village in Karimnagar district.

This morning, Puri’s son Akash Puri inaugurated his father’s statue and took some amusing selfies with it. Akash later thanked the fans for their ​affection towards his dad. Puri Jagannadh is currently directing Balakrishna for a Bhavya Creations’ production.