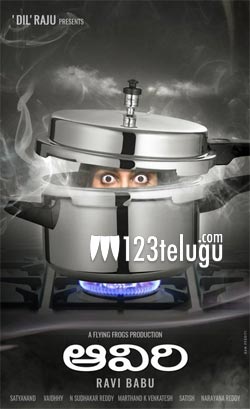 Of late, Dil Raju has been associating with various producers to jointly bankroll exciting projects. In an interesting move, the star producer has now teamed up with actor-filmmaker Ravi Babu for the latter’s upcoming horror flick, Aaviri. The film’s intriguing first look poster was unveiled this morning.

Like most of Ravi Babu’s movies, Aaviri too features a unique concept. The film stars a relatively new cast. The shooting has been progressing since January this year. Apart from directing and producing the movie, Ravi Babu is also playing the main lead in it, while Dil Raju will be the presenter.

The film will be released in October. Neha Chauhan, Sri Muktha, Bharani Shankar and Mukhtar Khan play important roles in the movie. More details will be revealed soon.
Attachments area