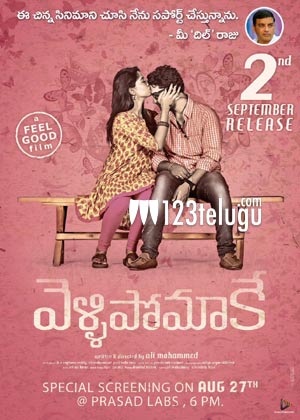 It’s well-known that hotshot producer Dil Raju is releasing a small film titled Vellipomakey. The film stars newcomers Vishwak Sen, Supraja and Swetha as the main leads and it is releasing on September 2nd.

Interestingly, Dil Raju is organizing a special free premiere of Vellipomakey at Prasad Labs on August 27 at 6 pm. Movie connoisseurs can watch the film for free. This is a new trend in pre-release promotions, and if the film generates good talk from this special show, the openings on the release day will be decent.