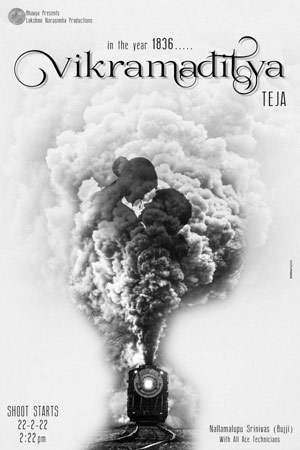 Director Teja, who is currently busy shooting for his next with Abhiram Daggubati, brother of Rana Daggubati, has announced his dream project on the occasion of his birthday. Titled, Vikramaditya, the first look poster has been released today.

The poster showcased the silhouettes of the lead pair in the steam of a train. As we can see in the poster, the story is set in the year 1836. It may be recalled here that Sir Arthur Cotton constructed Dhavaleswaram Barrage during that time. And there’s a connection between the love story with the bridge.

The complete details of the cast and crew of this high-budget movie will be announced very soon. Keep watching this space for more info about this movie.