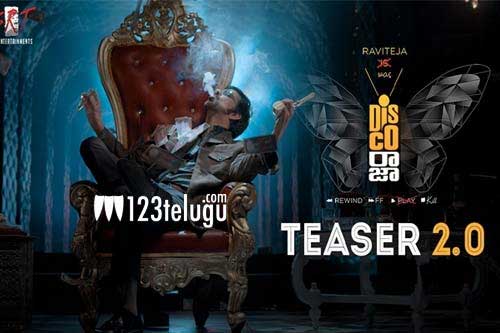 After the first teaser that intrigued and impressed everyone in December, the makers of Ravi Teja’s upcoming sci-fi action thriller, Disco Raja, now unveiled a new teaser. Just like its predecessor, even the teaser 2.0 is shot stylishly and is packed with loads of action and intriguing elements.

Disco Raja’s teaser 2 starts off with an interesting concept of Post War Stress Disorder. The teaser doesn’t reveal much about this disorder, but surely piques audience’s curiosity. The new teaser also introduces National Award winning Tamil actor Bobby Simha in a menacing role. Finally, Ravi Teja once again steals the show with his style and trademark body language. The slick visuals, stunts and the background score also raise the expectations on the film.
This VI Anand directorial has Tanya Hope, Payal Rajput and Nabha Natesh as its leading ladies. Ram Talluri is producing this high budget entertainer. The film is slated to hit screens on January 24.