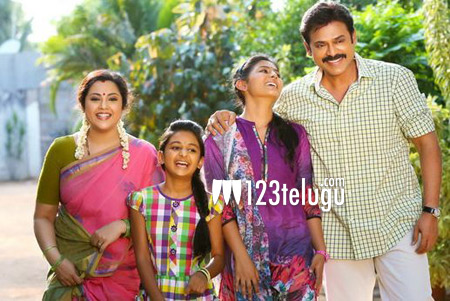 It is the most eagerly awaited Telugu film in July. And, its buzz is on a high pitch with the producers breaking new grounds. For the first time a media and audience preview was held 2 days before the Friday release.

In an attempt to catch the eyeballs and find new ways of audience reception the producers of the film Drishyam hosted an audience and media research screening in a city multiplex to gauge cine goer’s response. This is an unchartered armory in Telugu film marketing promotion that the producers were willing to give it a trial.

The idea was to see how audiences from various groups that included teenagers, families, women and from the media react watching the movie from opening to the end. The thought was to get a sense from the audiences whether the movie strikes chord instantly or is there some changes they wish could have been done to enhance the entertainment factor in the film.

When the producer of the film Suresh Babu was asked what was the reaction? He said the trial audiences were engrossed right till the end and soon after when we asked them to give their reactions they came up on stage and said it is a thoroughly enjoyable.

“Responses from people also revealed, it is a film young girls should take their brothers and boyfriends and parents should take their children. It is a wholesome entertainer that will captivate and bond with the youth too enormously” Suresh Babu added.

Most of the audience said ‘the climax stunned us’. The social media and online media also gave thumbs up to the film and said it is a ‘Well constructed movie’ and gave the movie 3.5 – 4 stars.

The main thing is to analyze audience reactions and discuss the value of audience research. We asked the audience to vote the film on its entertainment, script, screenplay, dialogue, music, drama and thrill elements. Many of them said the movie is a reflection of true to life family moments on screen.

Overall we found they liked the concept and termed it as unusual yet thoroughly enjoyable with lot of entertainment quotient. It is a true family-thriller and the lead stars Venkatesh, Meena , Nadia and all the supporting stars exceeded the expectations. The music too was good to ears and perfectly blended with the storyline.

The family thriller features Victory Venkatesh and Meena in lead roles and supported by Naresh and Nadia. Many said it is a perfect comeback for the hit pair Venky and Meena.

Produced by Suresh Productions and Rajkumar Theatres and directed by Sripriya, the movie releases worldwide on July 11.