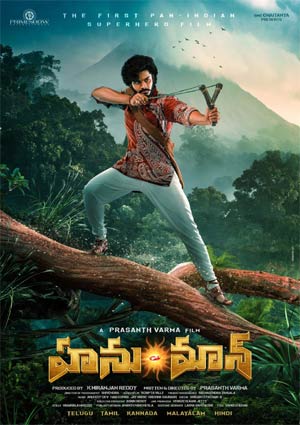 Prasanth Varma teams up with young hero Teja Sajja and the film HANU-MAN will be a visual treat for cine goers. As promised, the makers have come up with first look poster and also a 65 seconds glimpse introducing HANUMANTHU from the world of Anjanadri. Dulquer Salmaan has unleashed the first look poster and the glimpse.

The first look and the glimpse are enough to give hints about the kind of visual extravaganza we are going to witness on big screens. Teja Sajja can be seen standing on top of a tree in the dense forest and aiming his target with a slingshot.

Prasanth Varma seems to have created a new and fantasy world called Anjanadri. The visuals indicate HANU-MAN will be high on VFX. Popular production house Primeshow Entertainment is producing the movie on grand scale.