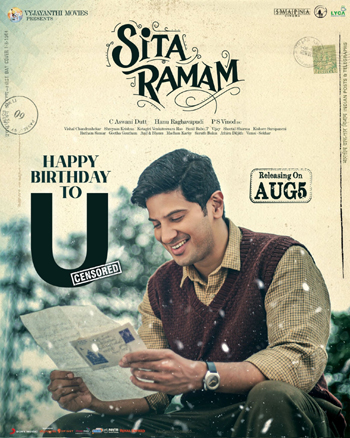 The theatrical trailer of Dulquer Salmaan’s next Telugu movie, Sita Ramam, has received a good response from every corner. Directed by Hanu Raghavapudi, the film has Mrunal Thakur as the love lady of DQ.

Today, the actor turned another year older and at the same time, the makers of the film have come up with an update about his film, Sita Ramam. The makers have announced that the film has cleared all the formalities including censor and was awarded a clean U certificate. On the other hand, the runtime of the movie is yet to be known.

Sita Ramam also has Prakash Raj, Vennela Kishore, Tharun Bhascker, Murali Sharma, Gautham Vasudev Menon, Sumanth, Shatru and others in key roles. Rashmika Mandanna will be seen in a crucial role in this romantic period drama, produced by Swapna Cinema and presented by Vyjayanthi Movies. Vishal Chandrashekar composed for this movie, scheduled to release on August 5, 2022.