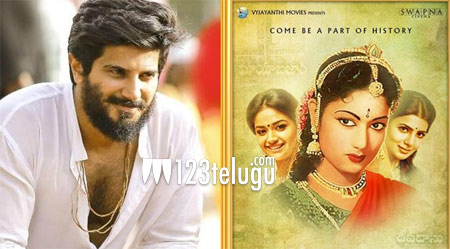 Malayalam star Dulquer Salman has finally wrapped up shooting his portion in Nag Ashwin’s upcoming film Mahanati, a biopic of legendary actress Savitri. The actor has played the role of Gemini Ganesan in the biopic, and it’s one of the most crucial roles in the film.

Last year, when Dulquer came onboard to play this role, it left many surprised. For most part of his career, Dulquer has played positive roles; however, this particular role in Mahanati is perhaps one of the most complex roles he has essayed so far. We’ll have to wait and see how Dulquer has pulled off this role.

Keerthy Suresh has played the lead role in the biopic, and the film also stars Samantha, Vijay Devarakonda, Shalini Pandey, Malavika Nair, Mohan Babu, Prakash Raj, Tarun Bhascker among many other actors. The film is gearing up for release in late March this year.