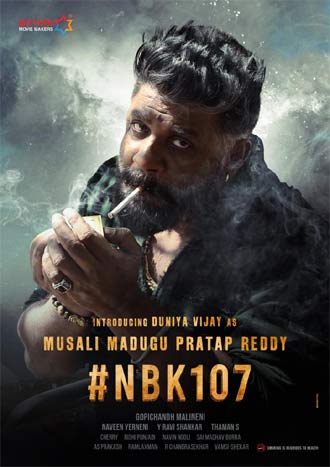 After scoring a massive success with Akhanda, Nandamuri Balakrishna has immediately joined the sets of his next. Tentatively titled, NBK 107, the movie is being directed by Gopichand Malineni.

Today, the makers have come up with a new update. They have revealed the character poster of Kannada actor, Duniya Vijay, who is playing the villain in this movie. Duniya Vijay as Musali Madugu Pratap Reddy. The actor is presented in an intense and fearsome getup in the poster where he appears smoking a cigarette. His getup hints at the powerful role he is playing in the movie.

Shruthi Haasan is playing the leading lady in this movie, produced by Naveen Yerneni and Ravi Shankar under the Mythri Movie Makers banner. Sensational music director Thaman S is the composer of this action entertainer.