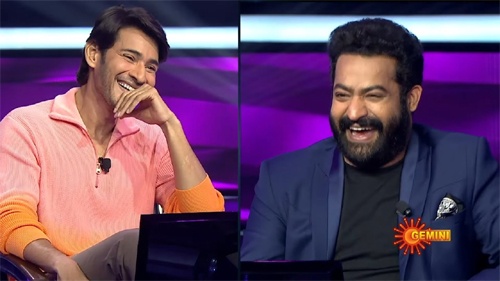 The final episode of the television game show, Evaro Meelo Koteeswarulu, which was telecasted last night, has garnered good viewership. The special episode had Tollywood Superstar Mahesh Babu in the hot seat and Jr NTR as the host.

The entertaining episode has been filled with special moments shared by both Mahesh and Tarak. During the game show, the host, Jr NTR asked Mahesh, which Mahabharata character is his favorite. He also questioned which character he would like to play if a movie were to be filmed based on the epic.

Superstar instantly replied that every character in Mahabharata is important and it is highly impossible to select a character. Immediately, Tarak expressed his view that Mahesh will look perfect in the avatar of Lord Krishna.

In this show, Mahesh Babu has won Rs.25 lakhs prize money and season 1 of EMK is over with this special episode.