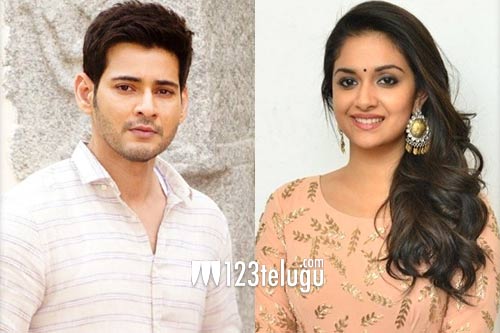 Star hero and heroine Mahesh Babu and Keerthy Suresh are sharing screen space with each other for the first time in Parasuram’s Sarkaru Vaari Paata. The film is set in the backdrop of bank scandals. After wrapping up a few crucial schedules, the film’s team has temporarily stalled the shooting formalities due to the pandemic.

Meanwhile, the latest buzz in film circles reveals that both Mahesh and Keerthy will be seen as colleagues in Sarkaru Vaari Paata. While Mahesh is said to be playing the role of a bank manager, Keerthy is rumored to be essaying Mahesh’s junior colleague. However, fans will have to wait until the film hits screens to know the actual truth behind this speculation.

Mythri Movie Makers banner is bankrolling this high budget entertainer and Thaman is composing the soundtrack. Mahesh’s GMB Entertainments and 14 Reels Plus banners are jointly presenting the movie.