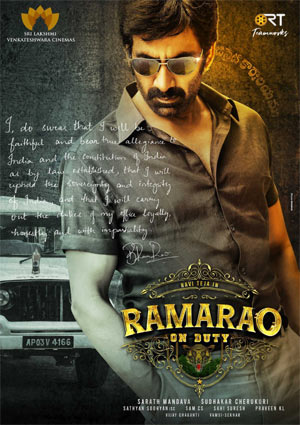 The film’s title and first look poster of Ravi Teja’s eagerly awaited 68th film, Ramarao on Duty, were unveiled yesterday to a huge response. Ravi Teja sported a suave and stylish look in the poster that also revealed that the Mass Maharaj will be seen as a government official in this action drama.

In a latest interview, Ramarao on Duty’s director Sarath Mandava revealed that Ravi Teja will be playing a Sub Collector in the movie. However, this is not a typical role as the actor will be seen in an eccentric and quirky role. Apparently, Ravi Teja’s role will be raw and spontaneous and that he likes to do things on his own terms.

Ramarao on Duty is set in 1995 and it is inspired by real incidents that occurred during that time period. Divyansha Kaushik is the leading lady in this Sudhakar Cherukuri production. RT Teamworks banner is jointly bankrolling the project.