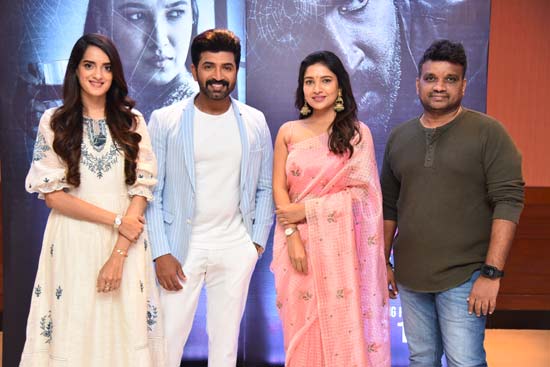 We are all familiar with the piracy site ‘Tamil Rockers’ that’s been uploading movies within an hour of release. Featuring insights into how their network actually works, the prestigious production house AVM Productions made a web series on the same name ‘Tamil Rockerz’ starring Arun Vijay, and Vani Bhojan as the main leads. Arivazhagan directed this show. SonyLIV is all set to stream it from 19th Aug.

As part of promotions, the team visited Hyderabad today. Director Arivazhagan said that the piracy website has also become a threat for Bollywood apart from the South. The director says they tried to unveil the working structure of the piracy gang’s network in the web series like how they film, upload and change their website address.

Hero Arun Vijay said that he has already worked with Director Arivazhagan for two films earlier Eeram & Kutram 23 and is also working with him for the film Border. He added that the director always comes up with unique concepts. The actor says that we have heard about Tamil Rockerz and through this series, they tried to bring the gang’s activities to light.

Producer Aruna Guha said that it’s important to evolve with the time and culture around and hence their production house ventured into OTT. She opines that if the audience stops watching, these piracy websites go down. Heroine Vani Bhojan said that she played Sandhya in the show and promised that the web series will give s an exciting investigation thriller feels for sure.