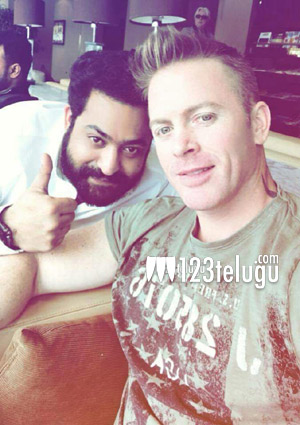 123telugu had reported a few weeks ago that NTR is toiling quite hard for a fit look for his soon to be commenced movie in Trivikram’s direction. Ever since a photograph in which the Young Tiger was seen posing with celebrity fitness trainer Lloyd Stevens made a splash on the internet, expectations among fans have shot up to the sky.

Lloyd Stevens is the man behind the ripper bodies of Bollywood’s macho hunks Hrithik Roshan and Ranveer Singh. This got Tarak fans wonder if NTR, after Temper, will once again be sporting a six-pack body in Trivikram’s film.

All said and done, NTR is determined to wow his fans with his physical transformation and he has been following a strict diet and workout regimen. The NTR-Trivikram movie will go on floors in February.