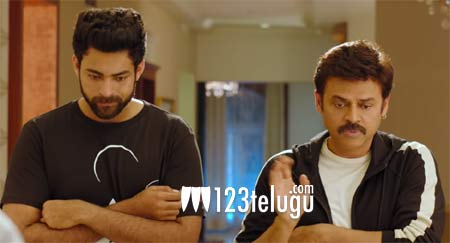 Director Anil Ravipudi has only given hit films to date and is a master when it comes to generating superb fun from normal and routine stories.

He is making a multi-starrer with Venkatesh and Varun Tej titled F2. The teaser of the film has been released today and by the first look of it, the talented director is all set to give a fun film once again for the audience.

After a long gap, Venkatesh makes a striking comeback and is superb with his comedy timing. The film is all about facing problems after getting married. Varun Tej is seen in a fun role for the first time and both the star hero’s chemistry is top notch.

Milky beauties, Tamannah and Mehreen look superb in the teaser which has been nicely cut to make things interesting for the audience. Dil Raju produces this film which has music by Devi Sri Prasad.