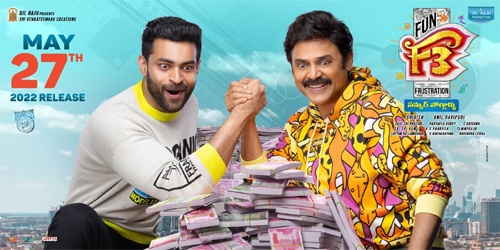 Of late, it has become common for big ticket Telugu films to release with ticket price hikes in Andhra Pradesh and Telangana. But team F3 has reportedly decided not to go with hiked ticket prices.

As per early reports, the makers of F3 have decided to go with normal ticket prices.

This would mean that F3 will be one of the first Telugu films to release with normal ticket prices. We need to wait for official confirmation on the same by the makers though.

F3 is releasing in theatres on the 27th of this month. The film is directed by Anil Ravipudi and it has Venkatesh, Varun Tej, Tamannaah, Mehreen, and Sonal Chauhan in the lead roles.