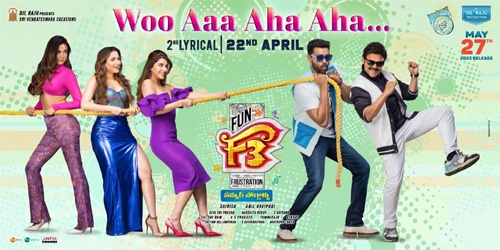 The first and theme song of F3 starring Victory Venkatesh and Mega Prince Varun Tej turned out to be a chartbuster. Rockstar Devi Sri Prasad scored an energetic number that featured the lead cast of the movie.

As part of musical promotions, the team will be releasing the second single Woo Aaa Aha Aha on the 22nd of April. The poster sees a ‘rope pulling’ game between the male and female leads of the movie.