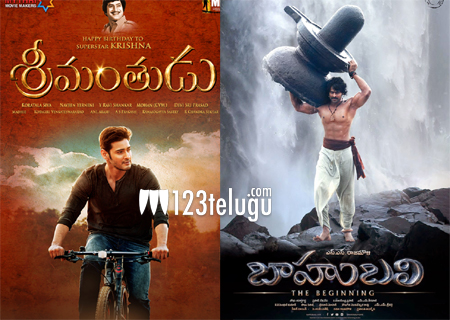 All the movie lovers are waiting with a bated breath for the release of the much awaited high profile movies, which have been the center of speculation from a long time. Starting from Guna Sekhar’s Rudhramadevi, which will hit the screens on the 26th of this month, Rajamouli’s Baahubali (10th July) and Mahesh Babu’s Srimanthudu(17th July) are also getting ready for an epic clash at the box office.

Given the fact that all these movies are made out of an extravagant budget, expectations are riding high and fans in the social networking sites are already expressing their eagerness to know which one of these movies will emerge as a winner at the box office.

On many occasions in the past, we have seen many star heroes flicks clashing at the box office but this is probably the first time in Tollywood when a total budget of around 300 crore will be at stake in a span of three weeks.

While Rudhramadevi and Bahubali are on a similar genre,as the stories of these two movies are about the kingdoms of past generations, Srimanthudu is completely different from them. As the directors and the stars of these three movies are capable of doing wonders at the box office, let’s hope they rack up huge collections and end this season on a high note for Tollywood.