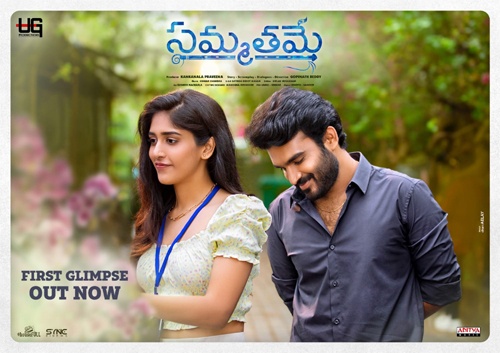 In Sammathame, Kiran Abbavaram plays a cool and mushy youngster who falls in love with his colleague Chandini Chowdary, who is seen as an outgoing and modern day working woman. Unlike Kiran, Chandini smokes and boozes and that leaves him mildly shocked. The glimpse video also showcases a fun game, wherein Kiran and Chandini communicate with each other through conversations weaved out of the lyrics of several hit songs. The rule of the game is that one who sings instead of expressing his or her feelings through songs loses the game.

Gopinath Reddy has directed this unique romantic entertainer. The glimpse video has some cool visuals and pleasant background score. Sammathame is going to wrap up its production formalities soon. Kankanala Praveena is bankrolling this project under UG Productions banner.