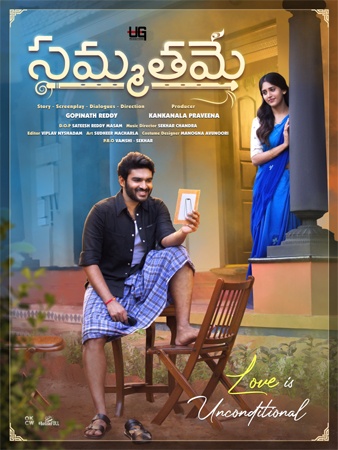 On the occasion of young hero Kiran Abbavaram’s birthday, the makers of his upcoming film, Sammathame, unveiled the film’s first look poster. Touted as a musical romantic entertainer, the film also stars young actress Chandini Chowdary as the female lead.

Sammathame’s first look poster features Kiran and Chandini as a couple in a rural middle-class setting. While Kiran is dressed in a lungi and shirt, Chandini sports a demure look in a saree. The title has the tagline – “Love is Unconditional”. 80 percent of the film’s shoot has been wrapped up so far and the remaining portion will be completed very soon.

Being directed by debutant Gopinath Reddy, Sammathame is produced by K Praveena under UG Productions banner. Sekhar Chandra is composing the soundtrack.