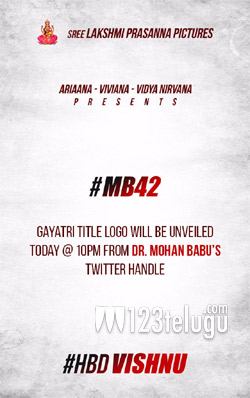 123telugu already reported that Mohan Babu is currently doing a very hard-hitting film called Gayatri. The latest we hear is that the first look of the film will be out tonight at 10 pm.

Anchor Anasuya will be playing a key role in the film along with Manchu Vishnu. Malayalam fame Nikhila Vimal will be seen as the leading lady in this film which is being directed by Madan.

Post-production of this film is on in full swing. More details about this project will soon be revealed.