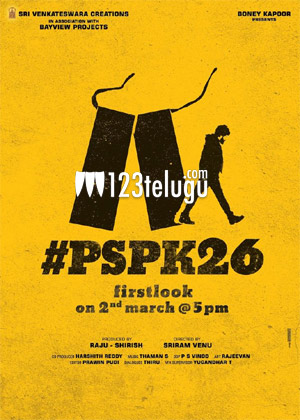 Here’s the official update on Pawan Kalyan’s highly-anticipated comeback film, Vakeel Saab. As reported earlier, the film’s first look poster will be out on March 2nd. The makers today made an official announcement that the first look will be out at 5 pm tomorrow.

Vakeel Saab is a remake of the acclaimed Bollywood courtroom drama, Pink. Pawan reprises the serious lawyer role portrayed by Amitabh Bachchan in the Hindi version. Anjali, Nivetha Thomas and Ananya play key roles in the movie. This Sriram Venu directorial is being produced by Dil Raju under Boney Kapoor presentation.