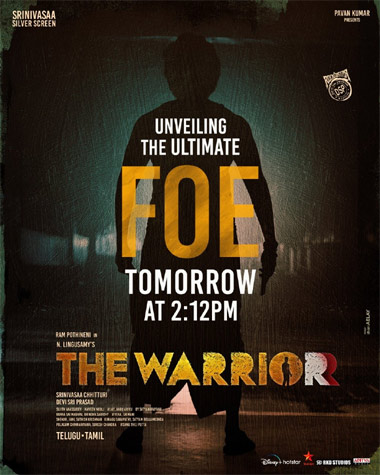 It is known that the energetic actor Ram Pothineni is doing a bilingual movie, The Warriorr, under the direction of Lingusamy. Billed to be an action drama, the movie has Krithi Shetty and Akshara Gowda as the female leads.

Now, the makers have announced that the first look of foe of the movie will be unveiled tomorrow at 02:12 PM. It is already known that Aadhi Pinishetty is playing the villain in this movie.

Produced by Srinivasaa Silver Screen, the movie will be released in Telugu and Tamil. Having Devi Sri Prasad as the music composer, the movie will showcase Ram Pothineni in two different shades.