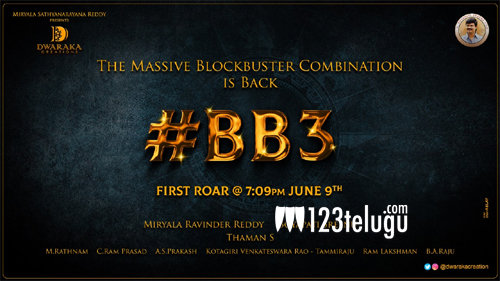 On the eve of hero Balakrishna’s 60th birthday, the makers of his highly-anticipated hat-trick film with director Boyapati Srinu will be releasing the ‘First Roar’ at 7:09 pm today. Whether the ‘First Roar’ is the title of the film or just a first look poster or the much-talked-about song crooned by Balayya will be known this evening.

BB3 had wrapped up its first schedule before the lockdown began three months ago. Balayya will be seen in a never before Aghora getup in the film, which is tentatively titled Monarch. The makers are yet to announce the name of the film’s leading lady. This Thaman musical is being bankrolled by Miryala Ravinder Reddy with a high budget.