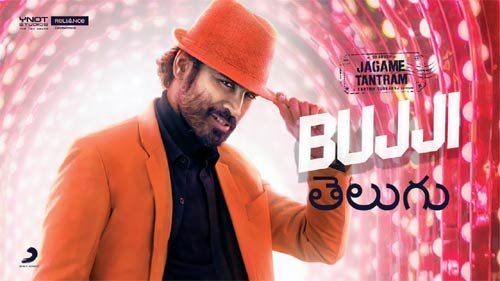 Bujji, the second single from acclaimed Tamil actor-filmmaker duo Dhanush and Karthik Subbaraj’s upcoming crime thriller, Jagame Tantram (Jagame Thandhiram in Tamil), is out this morning. The song features fun lyrics and peppy beats and is also shot in a unique manner.

Bujji has been sung by young Tamil music composer Santhosh Narayanan, who also composed the music for the film. Noted lyricist Bhaskarabhatla has penned the lyrics. Dhanush’s energetic moves choreographed by M Sherif will be a hit with his fans.

Jagame Tantram has young actress Aishwarya Lekshmi as its leading lady. The film has been produced by S.Sashikanth, who had earlier produced Venkatesh’s Guru. Noted Tollywood banners UV Creations and GA 2 Movies will release the film in the twin Telugu states.