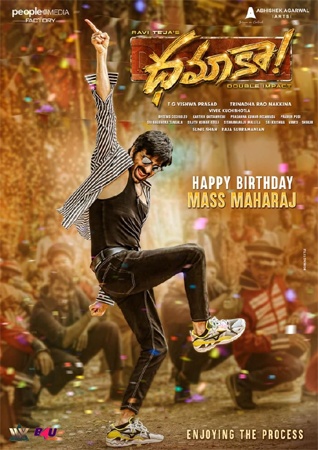 It is a known fact that Ravi Teja and Trinadha Rao Nakkina joined forces for an out and out entertainer called Dhamaka.

Wishing Ravi Teja on his birthday, a new poster of the film is revealed. Dressed in a striped shirt and black jeans, Ravi Teja looks ultra-stylish and jubilant in the poster.

The film is being mounted on a grand scale by People’s Media Factory and Abhishek Aggarwal Arts. TG Vishwa Prasad is producing the movie, while Vivek Kuchibhotla is the co-producer.

Prasanna Kumar Bezawada has penned the story and dialogues for the film, while Bheems Ceciroleo scores music and Karthik Ghattamaneni handles the camera.