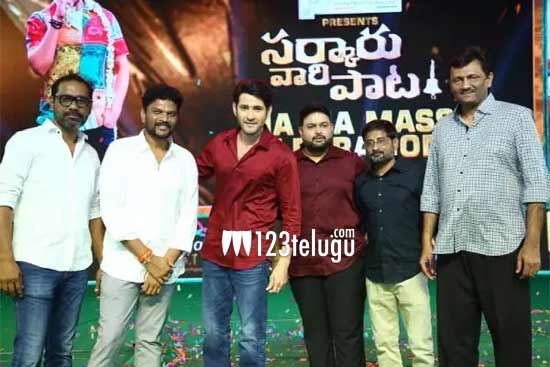 Superstar Mahesh Babu’s Sarkaru Vaari Paata is going well at the box office and has already collected more than Rs. 150 crores. The Ma Ma Mass celebrations of the movie happened in Kurnool last night. A massive crowd turned out for the event making the venue resemble a human sea.

Speaking at the event, Superstar Mahesh Babu said, “I came to Kurnool during the filming of ‘Okkadu’. I was very happy when the producers told me that we were celebrating the success of this film here. I did not expect so many people to come to this event. If there is a function, it should take place in Rayalaseema. A heartfelt thank you for your admiration.”

He further added, “Immediately after watching the movie, Gautham gave me a handshake and hugged me. “You did well in this movie, Dad,” Sitara complimented. “This movie will be a bigger hit than Pokiri and Dookudu,” said my father. All this credit goes to director Parasuram. We’ve had a lot of trouble for two years due to COVID and Lockdown. All that has disappeared with the overwhelming response.”

“Thanks to the technicians and producers who worked on this film. Keerthy Suresh and Samuthirakani have brought something new to the film. ‘Kalavathi’ song provided by Thaman has become an Anthem,” concluded the actor.