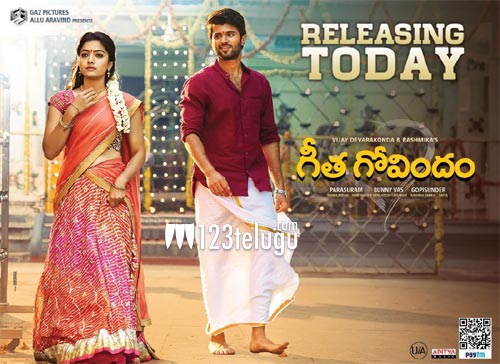 Cashing in on the highly positive pre-release buzz, Geetha Govindam has grossed nearly $376K until 2 am EST from 146 locations in the US. The film is expected to collect over $400K by the end of all the premieres tonight.

Geetha Govindam has comfortably surpassed Gautamiputra Satakarni’s $377K and placed itself at number 15th spot in the list of all-time highest grossing Telugu films in the US premieres. Needless to say that this is a solid start for Geetha Govindam and a million dollar opening weekend is surely a possibility if the film manages to get unanimous positive response from all quarters.

Vijay Deverakonda and Rashmika Mandanna played the main leads in Geetha Govindam. Parasuram has directed the movie and Bunny Vas has produced it. Allu Aravind has presented the film.