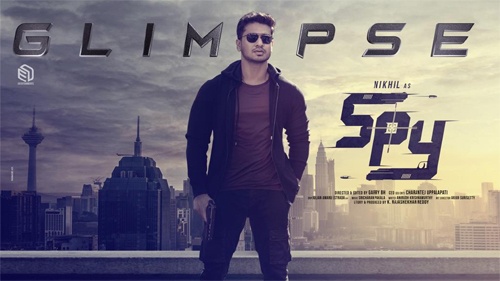 Young hero Nikhil Siddharth will be seen next in an out and out action thriller called Spy. As promised, the makers of the movie have unleashed a small glimpse of the movie.

The video showcases Nikhil walking in snow mountains with a transmitter in hand and finally finding a hideout that is full of weapons. Equipped with arms, Nikhil gets into action as he rides a bike and shoots the enemies. Nikhil looks slick, stylish and dashing in the action-packed video.

Iswarya Menon is the love interest of Nikhil in this movie whereas Aryan Rajesh will be seen in a special role. Abhinav Gomatam, Makrand Deshpande, Sanya Thakur, Jisshu Sen Gupta, Nitin Mehta, Ravi Varma and others are also a part of this movie.

Producer K Raja Shekhar Reddy, who also provided the story for this flick, the movie is billed to be a complete action-packed spy thriller. Sricharan Pakala renders soundtracks. Spy will be released in Telugu, Hindi, Tamil, Malayalam and Kannada in theatres across the globe for Dasara, 2022.