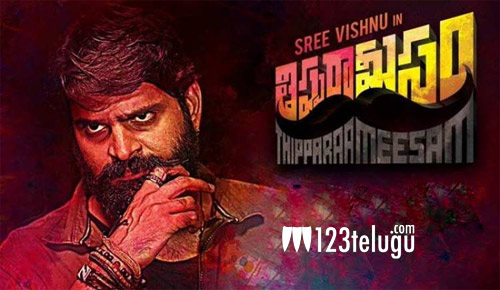 Hero Sree Vishnu’s next film will be a unique action thriller, titled Thippara Meesam. Following the success of Brochevarevarura, there has been a good craze for Thippara Meesam among the distributors.

Owing to the craze, Thippara Meesam has struck some solid pre-release business deals in the twin Telugu states and overseas. Worldwide, the film has been sold for Rs 7.50 crores, including the satellite and digital streaming rights. Noted distributor Sunil Narang of Asian Cinemas has acquired the film’s theatrical rights for AP and Telangana for a cool Rs 2.50 crores.

Thippara Meesam’s makers pocketed another Rs 75 lakhs from the Karnataka, Rest of India and Rest of World distribution rights. Furthermore, Rs 1.75 crores have been recovered from the Hindi dubbing rights. Finally, the satellite and digital rights were sold for Rs 2.50 crores.

These deals prove that Sree Vishnu’s popularity is on the rise. Directed by Krishna Vijay, Thippara Meesam is slated to release on November 8.